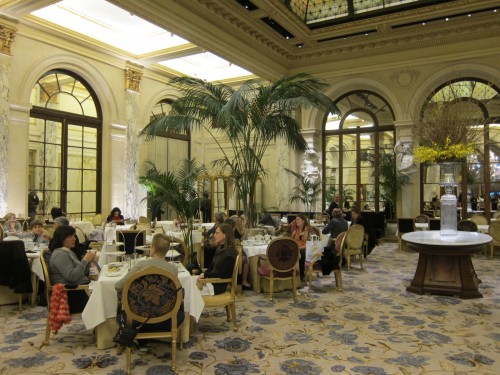 Dishes not to miss: It’s all really bad

Tea at the Plaza Hotel sounds like the quintessential New York thing to do. Throw Eloise into the mix and you’ve got a giddy group of excited little girls.

So off we went to the Plaza hotel for the special Eloise Tea at The Palm Court and a visit to the Eloise boutique.

We couldn’t have been more disappointed!

I think that the Plaza is a really tired old hotel with zero ambiance that is limping off of its old glory. The Palm Court reminds me of a glorified airport lounge where grace and charm are virtually non-existent. I thought perhaps they would redeem themselves with their food.

I could not eat 75% of the things I was served because it was so terrible. The scones were like crumbling bricks, the sandwiches had no flavor and the cookies and cakes – well I could have had better at any local deli in New York City.

Here’s the kicker though.

Though the Eloise boutique is cute, there isn’t a whole lot to do there and you can see the boutique for free anytime.

Don’t waste your money on this over hyped, overpriced experience. There are so many other, more meaningful experiences waiting for you in New York City.

This one – you can definitely skip.

8 thoughts on “The Eloise Tea at the Plaza Hotel, Midtown East, NYC”