Guess what I had tickets for this past week?

We reached around 6:15PM for the event which began at 6:30 PM for the Non-VIP ticket holders (that’s me!!). The line was wrapped around an entire Manhattan city block!!!! It took us almost an hour to reach the entrance! Of-Course I spent the entire hour worrying that there would be no food left for me……Boy was I wrong!

Once we were in……….the ultimate fest in gluttony began!

The Choice Eats Event is a true haven for foodies. It features many low to mid-level restaurants which are very affordable and accessible to all. There is a wide range of cuisines and every restaurant picks a few items that they prepare a small plate of, for people to taste.

Its hard to rate restaurants based on an event like this but I would like to feature some of the dishes and places that I thought really stood out. I didn’t get to taste everything, some vendors ran out of food by the time the masses came in (which I thought was unfair!) And then there were some long lines that were not worth waiting on. Also by the time I was about half way through, I started to realize just how full one can get on small plates of food.

It was a really fun experience and definitely has put some new restaurants on my list to go to.

Here are some things I ate that I thought really stood out: 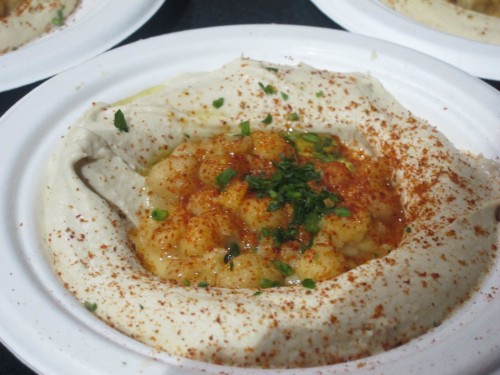 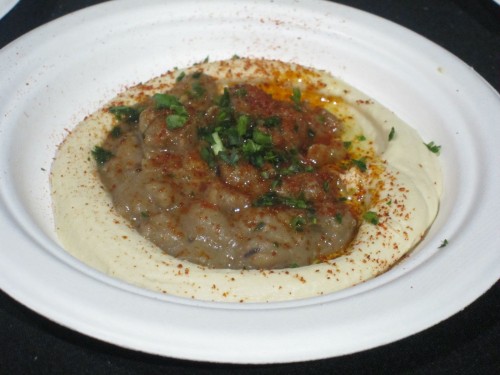 Hummus with fava bean topping and chickpea topping. I thought the basic Hummus was good, a little too creamy for my taste but tasty. I preferred the one with the Fava Bean topping.

Check them out at:http://www.hummusplace.com./ or 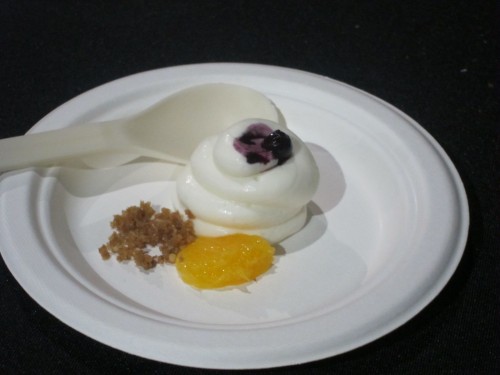 This spoonful of Soft Cheesecake with Blueberry Compote, Oranges and Passion Fruit Foam was outstanding. Check them out at: http://www.spotdessertbar.com/ or

Ovelia served Kafteri which is a hot, spicy mashed feta spread which was delicious and Ovelia Loukaniko which is their specialty house made sausage.

Check them out at: http://ovelia-ny.com/ 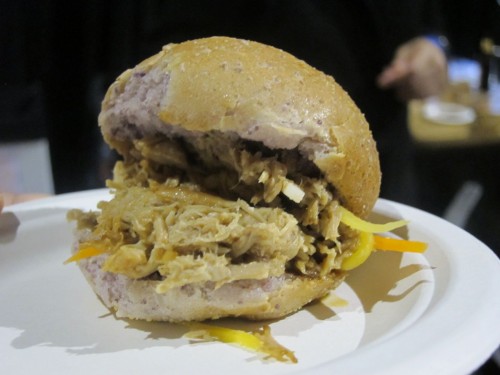 This was one of my favorites. Purple Yam serves Filipino cuisine. They had a great Tocino (sugar-achuete cured pork) Sliders in Purple Yam pan de sal, served with Grated Green Mango. The bread made with purple yam was so amazingly soft and delicious.

Check them out at: http://www.purpleyamnyc.com/ or 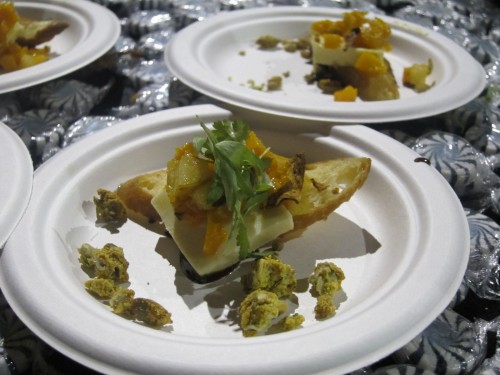 Dirt Candy was another restaurant that really stood out that night. In my books it really got the award for most innovative vegetarian cuisine. The served an Acorn Squash Mousse with Maple Smoked Butternut Squash and Curried Pumpkin Seeds. I know it doesn’t sound so thrilling but was OUTSTANDING!!!!!

Check them out at: http://www.dirtcandynyc.com/ or

Bunny Chow is South African fast food where a hollowed out loaf of bread is filled with curry. By the time we got to this stall, they had run out of bread but we did try the curry which was very rich and flavorful.

Check them out at: http://www.bunnychowny.com/ or 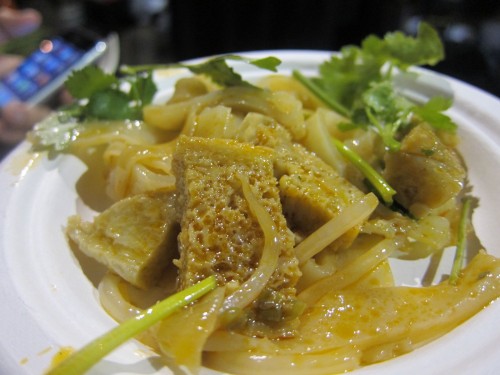 They served their famous Liang Pi Cold Skin Noodles which are made entirely of wheat flour. It was topped with cubes of Seitan, shredded vegetables and a sauce. this really was a delightful dish, great for the warmer weather.

Check them out at: http://www.xianfoods.com/ or 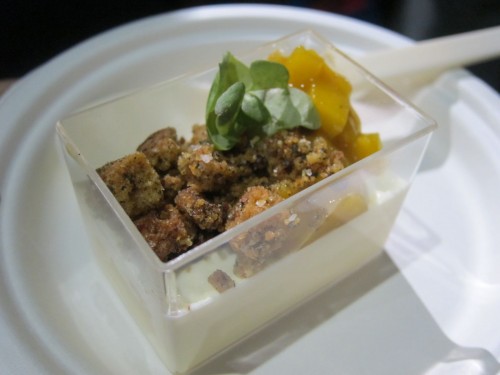 This was a beautifully presented Buttermilk Pudding with Mango which was very good.

Check them out at: http://www.no7restaurant.com/ or 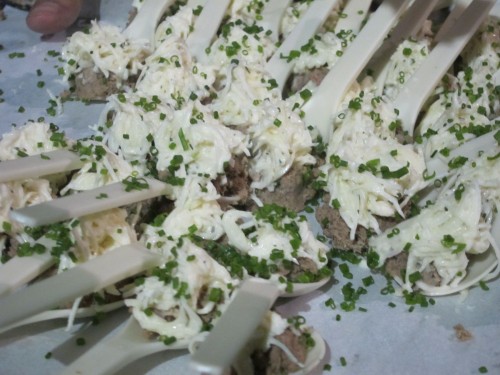 This French Brassiere served up spoons full of their Muscovey Duck Rillettes with Celery & Green Apple Remoulade on Brioche, which had great flavors and textures.

Check them out at: http://www.juliettewilliamsburg.com/ or 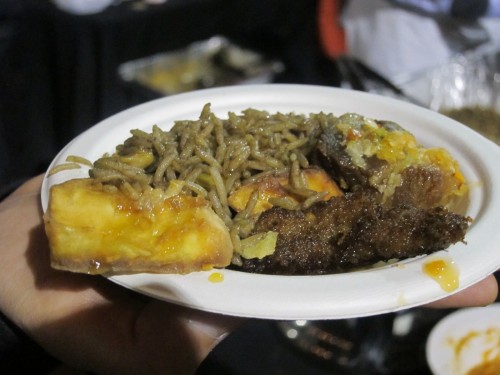 Both these Haitian restaurants had similar dishes and were as good as one another.

Check out Krik Krak at:

Check out Ambiance at:

Check them out at:  http://www.lukeslobster.com/ 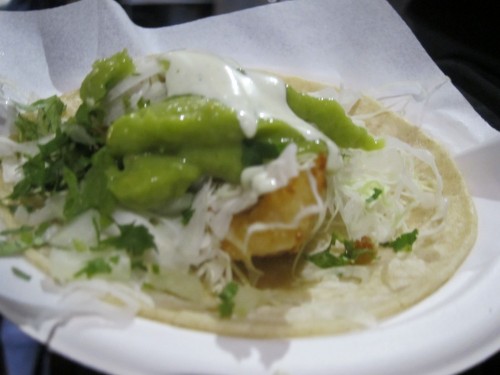 Pinche Taqueria had all kinds of great tacos with fillings from pork to veggies.

Check them out at: http://www.pinchetaqueria.us/menu/menu_menu.html or 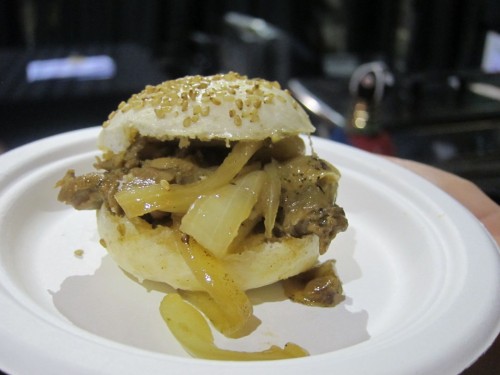 Check them out at: http://www.mantaonyc.com/ or

Patacon Pisao had a really nice Tres Leches which is a milk cake. It was such a delicious, smooth cake!

Check them out at: