I was recently invited to a preview of the movie at the MoMA, which was followed by conversation with Jonathan and Laura. We also had a follow-up lunch the next day at Mission Chinese. 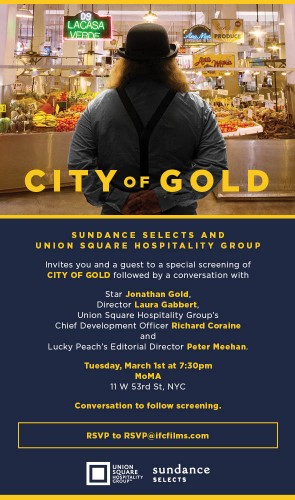 Disclaimer: I was invited as a guest to this event. All opinions expressed in this post are my own

This documentary marks the food explorations of renowned LA Times food critic Jonathon Gold as he uncovers the diverse culinary communities that exist in Los Angeles.

Better described as “A documentary portrait that takes us into Jonathan Gold’s universe to tell the improbable story of a revolution inspired by the pen, but driven by the palate.”

In this movie Gold traverses the length and breadth of the city, going beyond the “elite” restaurants to the myriad ethnic communities made up of immigrants that serve as the cultural soul of LA. It is here that Gold navigates “the incredibly varied culinary and cultural landscapes of the city that he loves.”

In this movie, Gold takes us from food trucks to family owned restaurants as we taste everything from tacos to fiery flavors from Chengdu to grasshoppers.

I can tell you that I left the preview ravenous and with a burning desire to fly to LA as soon as possible.

Do check out this really thoughtfully created film, which will feature in select theaters on Friday March 11th, 2016

One thought on “The City of Gold Movie”