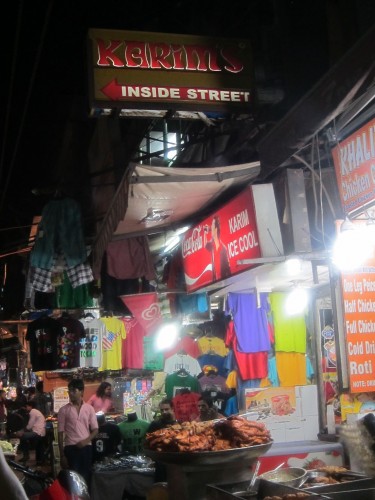 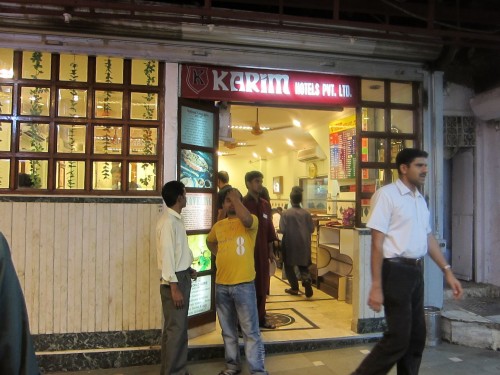 Chandini Chowk is truly India, as it should be experienced. I love every bit of it from the overfilled narrow streets that is equally shared by cars, people, animals, scooters, bicycles and so much more to the small stalls and street peddlers, selling everything from dinky little plastic toys, to mouthwatering food delights.

On one of these little streets is Karim’s, one of the best-known food spots in Chandini Chowk. Karim’s is run by the descendants of the royal chefs who prepared delicacies for the Imperial Kitchens of the Mughal Dynasty who ruled India in the 1700’s. Their recipes have been handed down for generations.

The setting is beautiful. It’s a short walk down from Gate 1 of the gorgeous Jama Masjid, one of Delhi’s great landmarks. With the melodiuos sounds of the evening prayers (namaz) blaring over loudspeakers from Jama Masjid, we made our way down a crowded narrow alleyway that opened into a little courtyard that led to Karim’s. 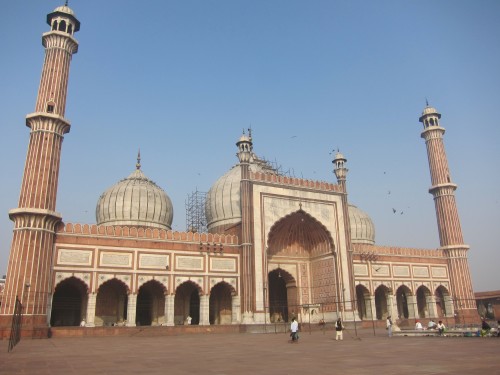 There’s a small open kitchen as you enter which services all four of Karim’s eateries. The place is milling with people and there is a furious activity in and around the open kitchen. It’s fascinating to watch the food being cooked, ladled, and served. It all works like clockwork and yet has so much soul and character. 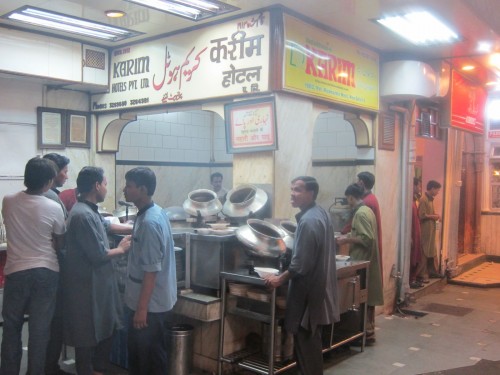 Karim’s serves typically Mughlai fare that is authentic. The food is pretty decent- not amazing. All the dishes are swimming in oil so do leave your calorie counter at home.

Going to Karim’s is really not so much about the food, as it is about tasting a little part of India’s culinary history and experiencing the true essence of India. 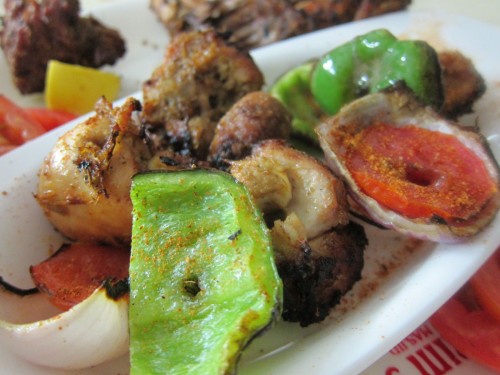 These grilled boneless chicken kababs were pretty good. I loved the crunchy bell peppers and onions that were grilled along with the kababs.

I loved the little counter in which certain kinds of kababs were being grilled. It was right at the entrance of one of the eateries. It’s like a little outdoor grilling station set up complete with instant ventilation and all (check it out in the picture –so much character!) 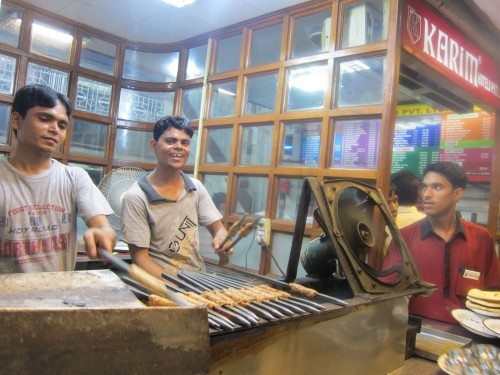 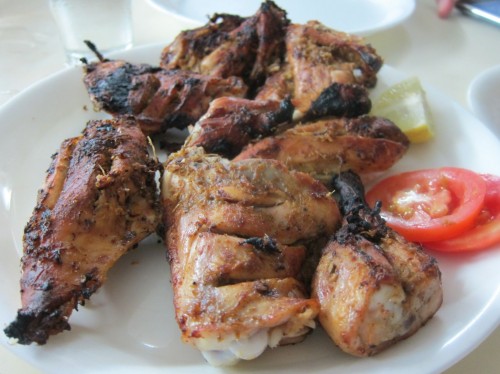 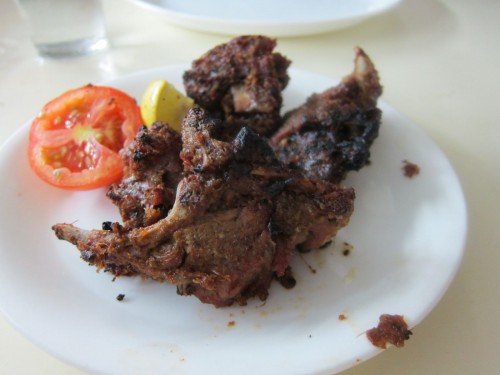 I thought these were the best kababs they make. I especially enjoyed the chicken burra kababs. 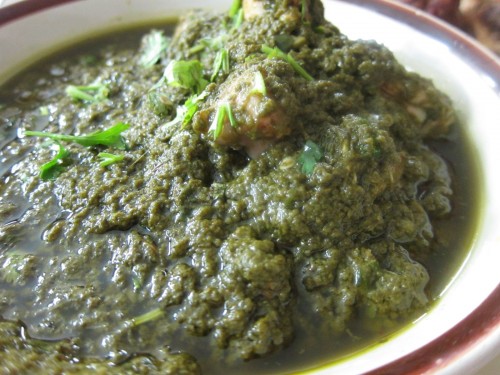 This chicken and spinach curry dish was pretty yummy, if you could get past all the oil. The chicken was very tender and the spinach was tasty. 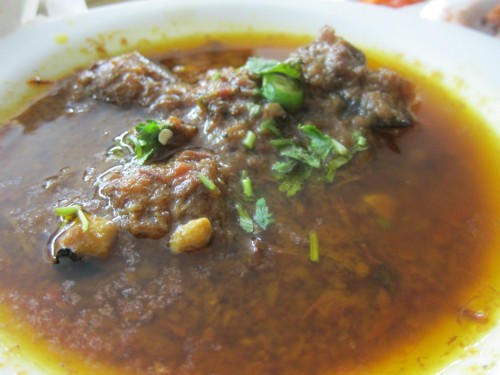 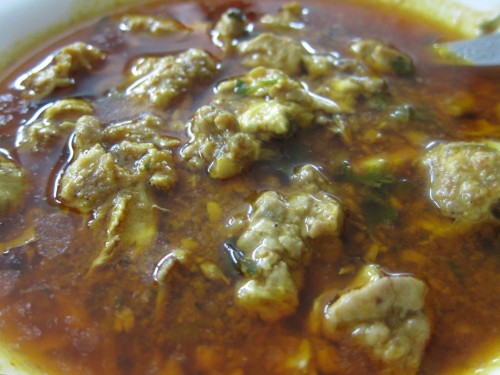 Yes you did hear it right –brain curry! Brian is considered to be a real delicacy in some parts of India. I thought the gravies of both these dishes were quite similar. 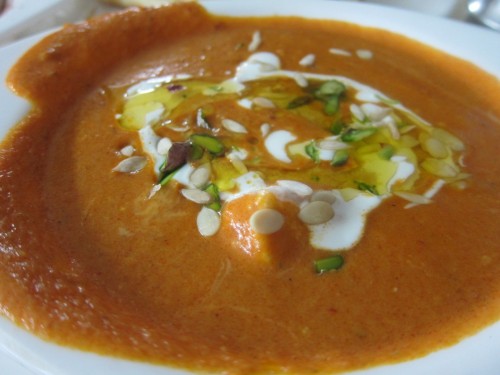 The paneer (homemade Indian cheese) was so delicate and soft in this dish. It just melted in my mouth. The gravy was tasty but a little on the sour side. 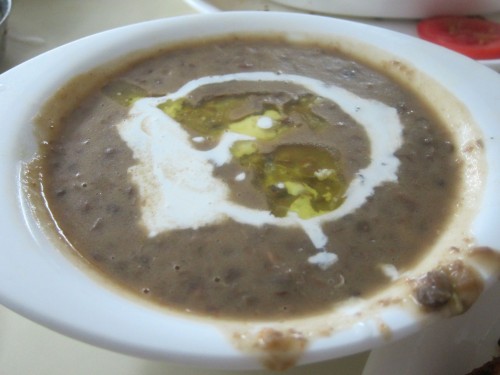 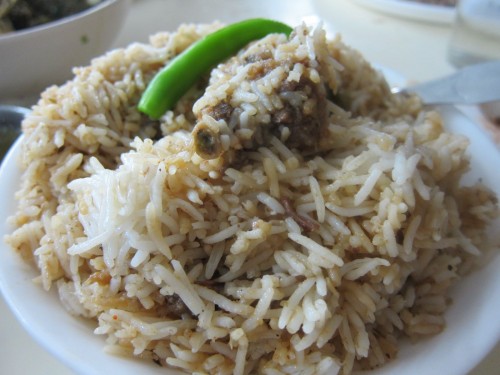 I thought the Biryani was a little disappointing. I expected them to make a phenomenal Biryani. It did however taste really good when I slathered on a lot of their chili-mint chutney. 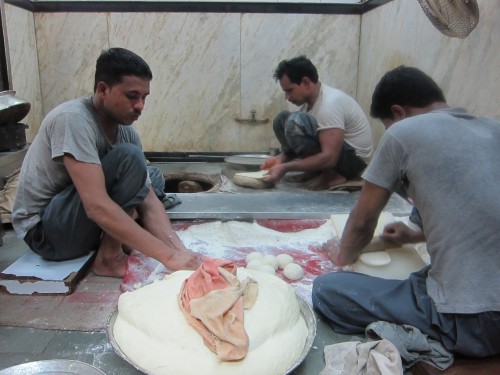 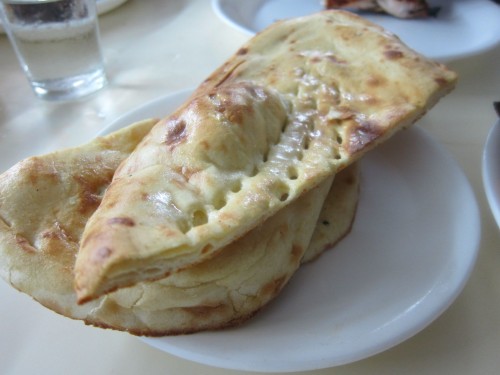 I love that in the open kitchen they have built in a tandoor (clay oven) right into the ground and that is where they make all the naans and rotis. They roll out the dough and stick the rotis right onto the walls of the tandoor and cook them right then and there. It was fascinating. 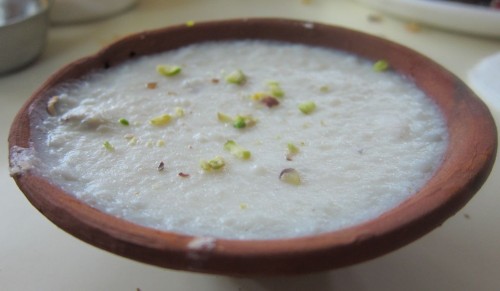 This is the only dessert they serve and it was a pretty bad kheer. I would skip the dessert. There are so many delicious sweet shops right outside where you can buy all kinds of fresh homemade Indian sweets.