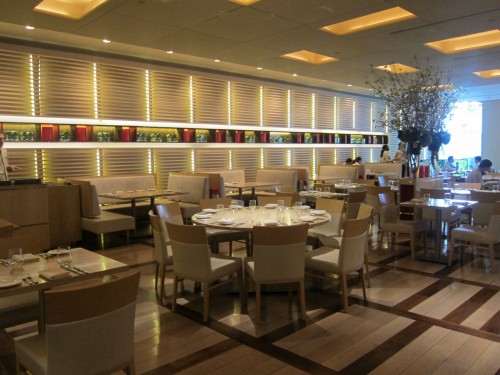 Rouge Tomate is just as sensuous an experience as the name suggests – “Rouge (Red) represents a passion and commitment to stimulating the senses while Tomate (Tomato) symbolizes an adherence to fresh, seasonal balanced cuisine”.

Opened in 2008 by Emmanuel Verstraeten in New York ( it has a counterpart in Brussels), Rouge Tamate adheres to the principles of SPE® (Sanitas Per Escam which means health through food).

They source and prep their food with a conscience, which means you won’t get any of that deep fried or heavily grilled dishes that are bad for you. The kitchen at Rouge Tamate sources locally and serves sustainable foods

Each dish aims to create a perfect balance between proteins and vegetables, so you can maximize all that’s good for you, in every bite.

We started with a very healthy kale and cranberry bean dip which was served with two kinds of bread. The dip was creamy and delicious but very low on salt. I felt I was eating spoons full of health! What a surprising combination of vegetables for a dip!

The hummus was tasty. It came with sweet peppers and house-cured olives. My favorite part of this appetizer was the flat-bread crisps which were perfectly crunchy and loaded with all my favorite seeds like poppy, fennel, flax, sesame and so on.

This was one of the most refreshing appetizers I have tried in recent times. The layering of flavors was outstanding. It began with a base of a savory celery root panna cotta on top of which was a perfectly crisp feuille de brick. This was then topped with the freshest peekytoe crab which was crowned with zesty slices of grapefruit, marcona almonds, chives and all kinds of little delicious details!

This fresh fillet of trout was cooked a la plancha which is a Spanish style of cooking “on the plate”. The trout came with a medley of onions cooked in different ways.

There was a sweet onion soubise, caramelized pearl onions and the trout was topped with a pickled ramp vinaigrette.

My favorite part of this creation was the tiny little beautiful white edible flowers which topped the fish. Though the dish was not one of the tastiest I’ve had – it was art on a plate! 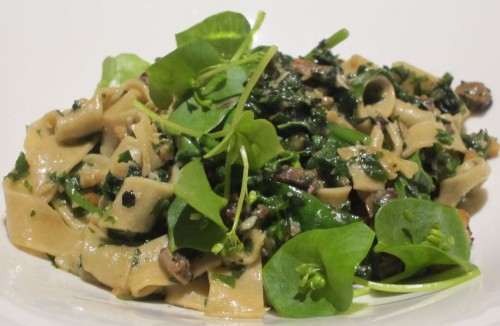 The tagliatelle came with Oregon morels and a pine-nut, garlic, basil pistou. It was topped with miner’s lettuce which is a wild green that looks as good as it tastes.

This dessert had tiny wedges of a lemon olive oil cake which came with mandarin, blood oranges and a house-made ricotta. This citrus dessert was fresh and zesty but it wasn’t mind blowing. I thought it had too much overlap with the peekytoe crab in flavor and design.